Saturday of the Thirty-Second Week of Ordinary Time 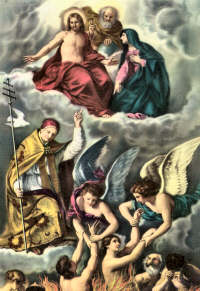 Ireland celebrates the Optional Memorial (feast in Dublin) of St. Laurence O'Toole (also referred to as "Lawrence"), the Archbishop of Dublin during the takeover of Ireland by the Normans and King Henry II. His efforts in the peace process and his frustration with King Henry probably caused his early death. St. Laurence is highly honored at Eu in Normandy, France, where he died.

Meditation: Purgatory is Temporary
Purgatory is not eternal. Its duration varies according to the sentence pronounced at each particular judgment. It may be prolonged for centuries in the case of the more guilty souls, or of those who, being excluded from the Catholic communion, are deprived of the suffrages of the Church, although by the divine mercy they have escaped hell. But the end of the world, which will be also the end of time, will close for ever the place of temporary expiation. God will know how to reconcile His justice and His goodness in the purification of the last members of the human race, and to supply by the intensity of the expiatory suffering what may be wanting in duration. But, whereas a favorable sentence at the particular judgment admits of eternal beatitude being suspended and postponed, and leaves the bodies of the elect to the same fate as those of the reprobate; at the universal judgment, every sentence, whether for heaven or for hell, will be absolute, and will be executed immediately and completely. Let us, then, live in expectation of the solemn hour, when "the dead shall hear the voice of the Son of God." He that is to come will come, and will not delay, as the Doctor of the Gentiles reminds us; His arrival will be sudden, as that of a thief, we are told, not only by St. Paul, but also by the prince of the apostles and the beloved disciple; and these in turn are but echoing the words of our Lord Himself: "As lightning cometh out of the east and appears even unto the west: so shall also the coming of the Son of Man be." 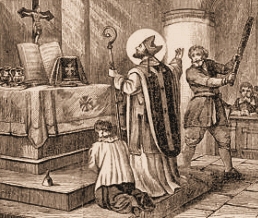 St. Laurence grew to be such a model of virtue, that at the young age of 25 he was chosen to replace the Bishop as abbot upon the Bishop’s death. He governed his community with virtue and prudence, and was unanimously chosen to fill the new See of Dublin in 1161.In 1171, St. Laurence visited King Henry II of England to handle affairs of his diocese. While approaching the altar to officiate at Mass, the Archbishop was violently attacked by a maniac. Everyone present thought he was mortally wounded, but Saint Laurence came to, asked for some water, blessed it and applied it to his wound. The bleeding immediately stopped and the Archbishop continued to celebrate Mass.St. Laurence was most widely known for his piety, charity, and prudence, and was respected as a negotiator.He died on November 14, 1180, at Eu in Normandy. He was canonized in 1225 by Honorius III.—Excerpted from Catholic News AgencyThings to Do: