Friday of the Thirtieth Week in Ordinary Time 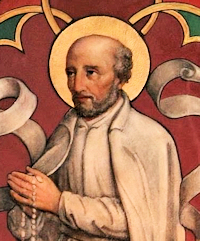 Historically today is the feast of St. Alphonsus Rodriguez of Segovia, Spain. He was the third child to a wool merchant. He had originally begun to study to be a Jesuit from age 14, but when he father died he was obligated to take over the family business at age 23. He married and had children, but on the death of his wife and children, he lost his shop and experienced misfortune. He prayed and was inspired to become a Jesuit at age 40. He was found too old to study for the priesthood and too weak to take up a lay brother’s work but the Provincial boldly admitted him, remarking that he was receiving him for his holiness. He proved right. A little while after his first vows he was appointed porter or door-keeper of the Jesuit college at Majorca and for the next forty years he remained at the same post. It was patient humble work for hours on end, daily walking up and down, taking messages of visitors and students and distributing alms to the poor. He was an influence for good to the hundreds who met him. He spent his time in quiet prayer and meditation, and towards the end he lost even his memory and could only say, “Jesus, Mary”. On October 31, 1617, surrounded by his Jesuit brothers he died. 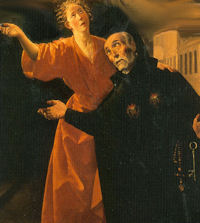