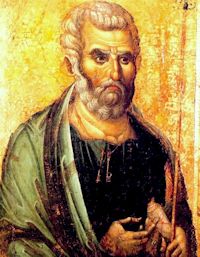 All-powerful and ever-living God, direct your love that is, within us, that our efforts in the name of your Son may bring mankind to unity and peace. We ask this through our Lord Jesus Christ, your Son, who lives and reigns with you and the Holy Spirit, God, for ever and ever. Amen.

"'What is your name?' Jesus asked. 'My name is legion,' he answered 'for there are many of us.' And he begged him earnestly not to send them out of the district. Now there was there on the mountainside a great herd of pigs feeding, and the unclean spirits begged him, 'Send us to the pigs, let us go into them' So he gave them leave. With that, the unclean spirits came out and went into the pigs, and the herd of about two thousand pigs charged down the cliff into the lake, and there they were drowned (Mk 5:9-14)."

According to the 1962 Missal of Bl. John XXIII the Extraordinary Form of the Roman Rite, today is the feast of St. Francis de Sales.The Man Possessed by Legion
We see this man in the Gospel, this man who was possessed by Legion and lived among the tombs and on the hillsides, screaming out and gnashing himself all day and night. Isn’t it interesting that, of all the people, he is the first one that the Lord sends out on a mission to go and preach the Gospel? He did not send His apostles as yet. And recall too that in the Jewish territories anyone whom Jesus healed He commanded them to tell no one about it. But this man was a pagan and so it was in the pagan areas, where the Jews would not have been going anyway because it was unclean, that the Lord sent this particular individual to go and preach the Gospel. And so he went through the Decapolis, the ten cities that were up on top of the mountainside, and he preached about what had happened and how his healing came about.Now this can give us great hope in one form or another. If the world tends to reject us because of the way we are living our lives (as long as we are not doing something that is utterly foolish) then if it is because of faith that we do what we do, it is pleasing to God and it is fully acceptable in the sight of God. We do not need to be doing great things; we do not need to be extraordinary (in the way that we recognize some of the saints). But if we are filled with faith and we are living according to that faith, even if other people think that we are strange, if God sees that we are acceptable then we are on the right track.At the same time, what we can also do is look back at our own lives and we can see the sinfulness of our lives. And we can wonder, as so often we do, whether God could even have mercy on such a rotten sinner as ourselves. “How could He ever forgive my sins? How could anything good ever come out of somebody like me?” we think. “Why would God ever want such a horrible person like me to be doing anything good for Him? Why would He want it?” Precisely because we are such horrible sinners. Can any of us suggest that we are possessed by hundreds of demons, living among the tombs and gnashing ourselves day and night? Yet this is the man that God sent to preach the Gospel to the pagans. And it is precisely because they all knew who he was. They saw him in his possessed form. They knew that he could not be bound and chained even with the strongest chains and that nothing could hold this man down. Now that he had been healed, once again, nothing could hold him down – not physically anymore, but spiritually; he was going to preach the Gospel no matter what it cost.The people wanted to stay in their sinfulness and in their paganism. Even when they saw this, they did not want to change and they begged Jesus to leave their territory. What a sad reality! To have God Himself come to you, heal the one who is the most notorious in your entire society, and you would beg Him to leave because you do not want to change, because you do not want to leave your sinfulness! But it is precisely in the one who is healed that the people would have to continue to look at him and recognize what happened and be faced with the reality that the Gospel had been preached among them and that they would have to accept it and change their lives.So if we look at our own sinfulness and we wonder what God would want with somebody like us, it is to live and to preach the Gospel precisely because if other people knew what a horrible life we have lived, then how can they reject the message of the Lord when they see that we are trying now to live a life of faith, that we have been healed by Jesus Christ? If, on the other hand, we have lived a holy life and by faith God has drawn us aside and made us a little bit odd according to the ways of the world and different in the eyes of those around us, praise God! That means the world is not worthy of you, but God has found you worthy; and it is a purification as He prepares you for the ultimate resurrection and for the glory of Heaven.Regardless of our situation, what we need to do is stop fighting with God and accept the fact that He has chosen us. He has chosen to heal us and now He is simply asking us to do His Will. We need to ask Him what His Will is for us and we need to seek to do it. When we see the examples that we hear of in the readings today, we realize that, one way or the other, not only are we no different from these people on one level, but we cannot even compare with them on either end of the spectrum. And so if that is the case, and God could choose these people, He can choose us as well. And He has. So it is time that we stop questioning God and it is time that we stop fighting with Him, and instead that we accept His choice, His call, and that we respond with our whole heart and seek to do His Will and to live and to preach the Gospel to others.* This text was transcribed from the audio recording of a homily by Father Robert Altier with minimal editing.


St. Gildas the Wise
He was probably born about 517, in the North of England or Wales. His father's name was Cau (or Nau) and that he came from noble lineage.

He lived in a time when the glory of Rome was faded from Britain. The permanent legions had been withdrawn by Maximus, who used them to sack Rome itself and make himself Emperor.Gildas noted for his piety was well educated, and was not afraid of publicly rebuking contemporary monarchs, at a time when libel was answered by a sword, rather than a Court order.He lived for many years as an ascetic hermit on Flatholm Island in the Bristol Channel. Here he established his reputation for that peculiar Celtic sort of holiness that consists of extreme self-denial and isolation. At around this time, according to the Welsh, he also preached to Nemata, the mother of St David, while she was pregnant with the Saint.In about 547 he wrote De Excidio Britanniae (The Ruin of Britain). In this he writes a brief tale of the island from pre-Roman times and criticizes the rulers of the island for their lax morals and blames their sins (and those that follow them) for the destruction of civilization in Britain. The book was avowedly written as a moral tale.He also wrote a longer work, the Epistle. This is a series of sermons on the moral laxity of rulers and of the clergy. In these Gildas shows that he has a wide reading of the Bible and of some other classical works.Gildas was an influential preacher, visiting Ireland and doing missionary work. He was responsible for the conversion of much of the island and may be the one who introduced anchorite customs to the monks of that land.He retired from Llancarfan to Rhuys, in Brittany, where he founded a monastery. Of his work on the running of a monastery (one of the earliest known in the Christian Church), only the so-called Penitential, a guide for Abbots in setting punishment, survives.He died around 571, at Rhuys. The monastery that he had founded became the center of his cult.St. Gildas is regarded as being one of the most influential figures of the early English Church. The influence of his writing was felt until well into the Middle Ages, particularly in the Celtic Church. Things to Do:
Find us on Social Media.