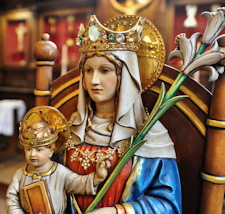 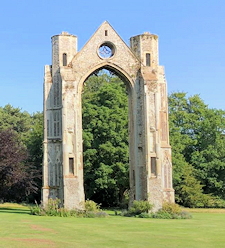 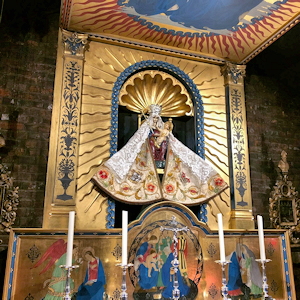 In 1897 Pope Leo XIII re-founded the ancient shrine of Our Lady of Walsingham, and pilgrimages are permitted to resume. On August 20, 1897, a procession of pilgrims from King's Lynn to the Slipper Chapel marked the renewal of public devotion to Our Lady of Walsingham. In 1922, the parish priest at the church of St. Mary the Virgin in Walsingham, Fr. Hope Patten, caused to have made a statue of Our Lady of Walsingham. He had discovered in the British Museum a medieval seal of the old monastery, and at its center was an image of our Lady -- presumably a representation of the image that had been destroyed at the Reformation. The statue of Our Lady was re-enshrined in 1922, beginning an era of cooperation at the shrine between Catholics and Anglicans.By 1931 the numbers had become too many for the parish church to cope with and a new shrine church was built, with the Holy House at its center and the image above its altar. So the Shrine of our Lady of Walsingham was reborn, and in our own time, it continues to draw thousands each year who, like the medieval predecessors come to discover the reality of “God with us,” and the effects of God’s loving and healing Grace and Love. 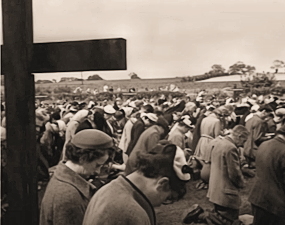 In August 1934 Cardinal Bourne led the Catholic bishops of England and Wales and ten thousand pilgrims to the Slipper Chapel, and from this date, it became the official Roman Catholic National Shrine. The four-hundredth anniversary of the shrine's destruction was commemorated in 1938 by a Pilgrimage of Catholic Youth, and in 1948 fourteen oak crosses were set up in the garden. There is a tradition for pilgrims to walk the last mile here barefoot. Many thousands of people have visited the Shrine--some come out of a spiritual need for the atmosphere of peace that seems to emanate from the Chapels, some for aesthetic reasons, whilst others merely stumble across us, nestled away in this secluded Norfolk Valley.In 1981 construction began on the Chapel of Reconciliation, a cooperative effort between the two confessions, and located near the shrine. The feast of Our Lady of Walsingham was reinstated in 2000. "When the Word was made Flesh, the universality of God came into the particularity of a little house in the village of Nazareth. The Incarnation means that God meets us not in an abstracted existence, but directly, within the particular places and circumstances of our lives. As Our Lady guided Richeldis to make a Nazareth in England, every chapel and shrine to Our Lady of Walsingham is a particular, local Nazareth, an encounter with the joy of the Incarnation in that special place." —Ordinariate of the Chair of Saint Peter.—Excerpted from Mary-Pages and Catholic Saints InfoPatrons: East Anglia, England, diocese of England, Personal Ordinariate of the Chair of Saint PeterThings to Do: 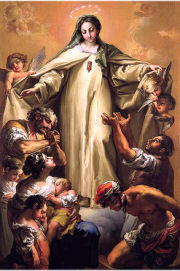 Our Blessed Mother herself appeared in a vision to St. Peter Nolasco, and requested him to found a religious order devoted to the rescue of captives. This was in 1218. Previous to that, since 1192, certain noblemen of Barcelona, Spain, had organized to care for the sick in hospitals and to rescue Christians from the Moors. St. Peter Nolasco, St. Raymond of Pennafort, and King James formed the new Order of Our Lady of Mercy. The group included religious priests who prayed and gathered the means, while the lay monks or knights went into the very camps of the Moors to buy back Christians, and, if necessary, take their very places. We have mentioned the magnitude of their success, a success that was won through the heavenly assistance of the Mother of Mercy, Our Lady of Ransom. —Excerpted from the Feasts of Our Lady by Fr. Arthur TonnePatrons: Barcelona, Spain; people named Clemency, Mercedes, Mercedez, Merced or Mercy. Things to Do: