Catholic Activity: Day Eleven ~ Activities for the Eleventh Day in the Octave of Christmas 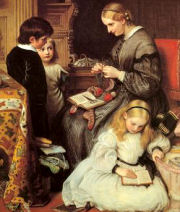 St. Elizabeth Ann Seton was a wife, mother, widow, convert, teacher, foundress and sister (nun). Quite a resume! It seems a woman in any situation would be able to identify with St. Elizabeth and pray to her for help. She knew riches and poverty, sickness, cold, rejection, sorrow. Today we look at the aspect of her as teacher. Here are a few legends of Christmas. When reading these to the family explain that these are "apocryphal" and what that means!

From the preface is a nice explanation:

In the long, long ago, before there were printed books in the world, there were story-tellers everywhere. And about one hundred years after the first Easter, the people of many nations began to wonder about the childhood of Jesus. So the storytellers asked questions of all who knew anything that might be true about that little Boy and His friends. At last they collected stories that became legends. Many of the legends were put into the APOCRYPHAL books. It was harder for me to learn to say that queer word than it was to write seventeen of the legends to suit myself; so do not laugh at your big brothers and sisters if they too, stumble over the words APOCRYPHY and APOCRYPHAL.

A Christmas Gift for a Little Beetle

Somebody on a summer night in the ong ago thought up a beetle story to make little children smile. The story was told over and over in lands beyond the blue sea, until it became a legend.

Under the roof of the stable where the little Lord Jesus was born, there lived a tiny beetle. He must have had wonderful ears because he heard the angels singing on the faraway hills where shepherds were watching their flocks.

He heard the voice of the angel saying: "For unto you is born this day in the city of David a Savior, which is Christ the Lord. And this shall be a sign unto you. Ye shall find the babe wrapped in swaddling clothes, lying in a manger."

Then, so the story goes, the little beetle heard the multitude of angels saying: "Glory to God in the highest, and on earth peace, good will to men."

The little beetle looked down from the roof of the stable and there he saw the Baby lying in the manger. There He was, asleep in the hay.

Straightway the tiny beetle longed to tell all of his friends, the birds, the butterflies, and the animals, about the birth of the wonderful Baby. First though, he wished to see the angels, to be sure that he had the story straight. So away he flew to the hillside where still the glory shone around from the sky. He was just in time to catch the last angel of the multitude of angels, as he was about to leave the earth. Straight he flew to speak with him.

And it pleased the angel to learn that even a tiny beetle was filled with joy because he had heard the glad tidings of the birth of the little Lord Jesus. So, just before he went up and up to enter the open gates of Heaven, the angel took a sparkling jewel from his hair, and placed it on the back of the tiny beetle for a Christmas gift. There it shone with a wondrous light, now here, now there.

And from that minute the little beetle went flying, up and down and around, flashing his light over all Bethlehem. And wherever he found his friends on the earth, in the bushes and on the trees, he told the glad tidings of great joy about the Baby in the manger.

And his friends, the lowly worms, all the insects, and the birds, marveled at the shining, flashing gift the angel had placed upon the beetle's back. They named him, the FIREFLY.

In our country at Christmas time the fireflies are sleeping under the snow. But when we see them flashing their lights in the fields and gardens, on summer evenings, making all the world so lovely, suppose we tell them about the angel who gave flashlights to their family in the long ago at Bethlehem.

Legend of the Animals on Christmas Eve

One of the loveliest legends told in the old books is about our four-footed friends and the birds on Christmas Eve.

On Christmas Eve the world around, something wonderful happens at midnight, At that solemn hour all the animals in the barns, the fields, the plains, and the forests, fall upon their knees; and all the birds sing praises because Jesus was born at Bethlehem, and the angels sang for the shepherds.

Once on a beautiful moonlight Christmas Eve in our own country, a traveler found an Indian creeping through the forest on his hands and knees. The Indian motioned for the traveler to be still. Then in a whisper he said

"Me watch to see the deer kneel. This is Christmas night, and all the deer fall on their knees to the Great Spirit, and look up."

Perhaps the famous artists of the olden time were the first to tell the story. They made pictures of the Infant Jesus and His mother in the stable at Bethlehem, showing the animals, the ox and the ass, on their knees, in adoration of the Child.

Little French children of the long ago were told that after the ox and the ass had knelt before the manger where they had adored the Baby lying on His bed of hay, they walked into the night. But the stars shone so bright, and the air was so filled with mystery, they scarcely dared to step. They heard the wings of angels. At their feet the grass became a wondrous green, and flowers bloomed. The pebbles on the path were shining like jewels. The trees were bowing their heads. The birds sang gloriously. Roosters were crowing, and everything that lived and breathed knew that the King of Heaven had come down to earth to live.

The ox knew that he was a clumsy animal, and outside the stable he feared that he might bump against an angel if he moved about. He was hungry but he dared not eat the grass at his feet, that seemed, to be alive and listening; nor had he dared to touch the hay in the stable because it too had come alive, with flowers lifting their bright heads to bow before the little Lord Jesus in the manger.

Softly those two animals, the ox and the ass, went back into the stable, and there on his knees the ox told the beautiful Baby to have no fear of him. He said that he wore his long horns only for looks. He never never had used them to frighten any one. He loved the little Lord Jesus.

But perhaps the most interesting legend of all is told as a play, in which the Rooster, the Raven, the Ox, the Sheep, the Ass, and the Hen, were actors. Others in the play sang in the angel chorus. The rooster speaks first.

The Rooster: Christ is born.
Raven: When?
The Crow: This night!
Ox: Where, where? (Of course this is not the ox of the stable)
Sheep: Bethlehem.
Ass: Let us go.
Hen: Go there. Go there at once!

While they wait, the angels sing, and the shepherds pass on their way to the stable. When the angel chorus sings, the animals fall upon their knees and look up.

Boys and girls may give this play on Christmas Eve, with little brothers and sisters taking the parts of the birds and animals.

Others may be angels in the chorus, or shepherds.

How beautiful it would be if all the animals in the world should, as the Indian said, "fall upon their knees to the Great Spirit and look up." Anyway, we may do so.

And on Christmas morning, it may be wise to be especially kind to all the animals and birds, and to give them their favorite food and water, as all good children do in Europe, even unto this day.

From Legends of the Christ Child by Frances Margaret Fox, Copyright 1941, Sheed & Ward.