Gather your family around the Christmas tree and read Thomas of Celano's account of St. Francis and the first Christmas crib. The poem Santo Bambino is also nice to read. Then sing carols and eat more of your Christmas goodies. Savor these moments as the end of the Christmas season draws near!

It should be recorded and held in reverent memory what Blessed Francis did near the town of Greccio, on the feast day of the Nativity of our Lord Jesus Christ, three years before his glorious death. In that town lived a certain man by the name of John (Messer Giovanni Velitta) who stood in high esteem, and whose life was even better than his reputation. Blessed Francis loved him with a special affection because, being very noble and much honored, he despised the nobility of the flesh and strove after the nobility of the soul. Blessed Francis often saw this man. He now called him about two weeks before Christmas and said to him:

"If you desire that we should celebrate this year's Christmas together at Greccio, go quickly and prepare what I tell you; for I want to enact the memory of the infant who was born at Bethlehem, and how He was deprived of all the comforts babies enjoy; how He was bedded in the manger on hay, between an ass and an ox. For once I want to see all this with my own eyes."

When that good and faithful man had heard this, he departed quickly and prepared in the above-mentioned place everything that the Saint had told him. The joyful day approached. The brethren (Franciscan friars] were called from many communities. The men and women of the neighborhood, as best they could, prepared candles and torches to brighten the night.

Finally the Saint of God arrived, found everything prepared, saw it and rejoiced. The crib was made ready, hay was brought, the ox and ass were led to the spot.... Greccio became a new Bethlehem. The night was made radiant like the day, filling men and animals with joy. The crowds drew near and rejoiced in the novelty of the celebration. Their voices resounded from the woods, and the rocky cliff echoed the jubilant outburst. As they sang in praise of God, the whole night rang with exultation.

The Saint of God stood before the crib, overcome with devotion and wondrous joy. A solemn Mass was sung at the crib. The Saint, dressed in deacon's vestments, for a deacon he was, sang the Gospel. Then he preached a delightful sermon to the people who stood around him. 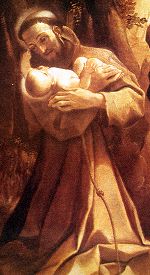 A peaceful Christmas be yours today
As the Babe in His holy manger lay.
Happy as one St. Francis knew
With joy and peace and blessing, too.

Where there, at Midnight Mass, he sung
"They laid Him in a manger." None
But he could know the mystery
And beauty of Nativity.

For lo! There came a brilliant light
And in his arms all nestled tight
Appeared the Babe of all the world
With tidings of good will unfurled.
Peace this day, let all be well.
Noel!
Noel!
Noel!
— Greta McOmber Sciutto