Catholic Activity: The Masses of Christmas 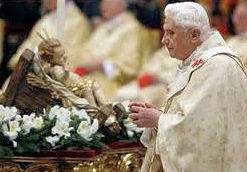 The custom of celebrating three Masses on Christmas Day goes back to ancient times. The Christians of Jerusalem attended Mass at midnight at the Grotto of the Nativity in Bethlehem; then they returned to Jerusalem and at daybreak (the hour of the Resurrection) attended a second Mass at the Basilica of the Resurrection; later on, they attended the regular services of the day. In Rome, a similar custom prevailed. The midnight Mass was celebrated at the Crib at St. Mary Major; the second, at the imperial church of St. Anastasia; the third, at St. Peter's Basilica. All three Masses are permeated with the thought of the threefold birth of Christ.

The eternal generation of the Son by the Father: in the eternal now the Father is begetting the Son: "The Lord hath said to me: 'Thou art My Son, this day have I begotten Thee' "

The Second Mass at Christmas (at dawn)

The Christmas Liturgy shows forth the Eucharistic Host in the setting of Bethlehem. The tabernacle is truly Bethlehem, the "House of Bread." The Altar is the manger where lies the Infant God, our Emmanuel. Come, let us adore Him.

Christ is born in our hearts: He has come to save us. He is the Savior of the world. He gives us His grace and thus prepares us for life everlasting. He overcomes the old man in us, makes us partakers of divine life, and helps us to show forth in our actions that which by faith shines in our mind.

The Third Mass of Christmas (during the day)

Christ became what we are in order to make us become what He is. The Son of God became Son of Man that the sons of men might become the sons of God. He Who was rich in heavenly glory became poor for our sakes that through His poverty we might become rich. He Who was eternally happy in heaven became the Man of Sorrows that through His tears we might enter into the joy of the Lord.

Christ came to save us: The Church sings that on "this day a great light hath descended upon the earth". This light shone in the darkness but the darkness did not comprehend it. "As many as received Him to them He gave power to become the sons of God". — Excerpted from Cathedral Daily Missal by Right Rev. Msgr. Rudolph G. Bandas PH.D., AGG., S.T.D., et M.
Find us on Social Media.