The Meaning and Misconceptions of The Saint Andrew Christmas Novena

This feast is the marker that determines the start of Advent. The first Sunday of Advent begins on the Sunday closest to (or on) November 30th, St. Andrew's feast day. That explains the first part of the Saint Andrew Christmas Novena's name. The second part simply refers to when the novena ends. On Christmas. So a longer way of saying it is: The Saint Andrew to Christmas Day Novena. Kind of long, which is why it's also known simply as the Christmas Novena. 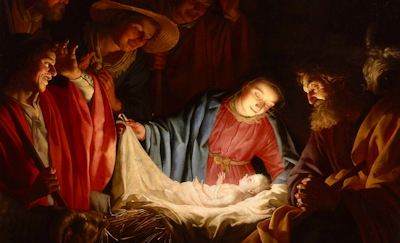 This feast is the marker that determines the start of Advent. The first Sunday of Advent begins on the Sunday closest to (or on) November 30th, St. Andrew's feast day. That explains the first part of the Saint Andrew Christmas Novena's name. The second part simply refers to when the novena ends. On Christmas. So a longer way of saying it is: The Saint Andrew to Christmas Day Novena. Kind of long, which is why it's also known simply as the Christmas Novena.

Some people mistakenly think they are praying to St. Andrew while praying this novena, surely, and innocently due to it's initially peculiar sounding title. Understandable. But just to be clear, while no one is saying to ignore or exclude Saint Andrew from our thoughts while saying this prayer (indeed, St. Andrew is a great example of "dropping our nets" to follow Christ and inviting others to do the same), the Christmas Novena itself is actually directed toward God Himself. We are asking God directly, with joyful anticipation and confidence, to grant our deepest longings on the momentous occasion of our Savior's birth.

It is a short, deceptively simple, and beautiful Advent prayer that is traditionally said 15 times a day and zeros in on that epic, sacred moment when Christ, through His Blessed Mother, entered human history, and our destiny was forever changed.

Hail and blessed be the hour and moment in which the Son of God was born of the most pure Virgin Mary, at midnight, in Bethlehem, in piercing cold.

It's an amazing visual! ...at midnight, in Bethlehem, in piercing cold! The repetition of the prayer really drives home how cold, dark, and isolated that moment was: when the most omnipotent being, the Son of God, in the dark of night slipped quietly into this side of the veil, through an extraordinary young woman. By those words, we allow ourselves to focus our hearts and minds squarely at that moment and just let ourselves 'be' in awe of the humble beginnings of our salvation and redemption, at midnight, in Bethlehem, in piercing cold. Just breathtaking!

The prayer continues, In that hour, vouchsafe, O my God! to hear my prayer and grant my desires... At the most ripe, fruitful, and potent moment in human history up to that point, we are invited to present the desires of our heart. Could there be a more hopeful time to entrust our needs in? As salvation history begins to unfold, we have reason to allow ourselves to confidently hope for the fulfillment of our present needs, as well as joyfully look forward to the Second Coming.

The season of Advent doesn't exist just to prepare us to commemorate the historical coming of Christ 2000 years ago, but Advent is also meant to help us prepare ourselves for Christ's Second Coming as well.

It is in that hopeful space of the promise of Christ having already come, and also coming again, that we search our hearts for our deepest desires and confidently present them to God Himself in virtue of His Son's birth. Who can say no to all that?

It is piously believed that whoever says this prayer with devotion will have their prayers answered, when or how is another matter I'm sure. But this hour and moment remind me of another potent hour and moment when a certain good thief, on a certain Good Friday, 'stole heaven' as they say. So, practicing the presence of being acutely aware of these 'potent moments' and offering our heart's desires, in the name of those moments, seems to be a really good practice with big-time results.

The prayer concludes with, through the merits of Our Savior Jesus Christ, and of His Blessed Mother. Amen. At the time of His birth, an admittedly a joyous celebration, we are reminded of the means of our salvation by the word 'merits'. Christ won our salvation by crucifixion on the cross, a sober reminder of the cost He paid for our sins.

And all this Our Lady consented to with her first 'yes'. It was prophesied by Simeon that a sword would pierce her heart, that she would suffer also. She, in essence, co-redeemed us with her Son, which is why she is also known as Mediatrix of All Grace, because it was through her that Christ was born, and through her, we continue to receive the merits of salvation.

This is good to remember as we commemorate Christ's birth historically, experience Christ every day in the sacraments especially in the Eucharist, as well as how we look towards the promised Second Coming of Christ, that the most pure Virgin Mary, continues to have her hand in presenting her Son to us, along with the graces He wants us to have.

Why 15 times a day? No one really knows, but I'll take a pious stab at some possibilities. The prayer is believed to be over 100 years old and is traditionally prayed 15 times every day, though not necessarily all at once. (It may be broken up to be prayed throughout the day, such as five prayers in the morning, afternoon, and evening, the way the Angelus is repeated, or the Divine Office is spread out throughout the day.) The number 15 reminds me of the original 15 decades of the rosary, which was itself seen as a potentially simplified version of praying the 150 psalms that are still sung by religious in monasteries and convents praying the Divine Office. There you go, not official, but it could explain why 15 times.

Not to mention that the 15 repetitions a day definitely drives home the visual of how blessed that hour and moment was at midnight, in Bethlehem, in piercing cold, so much so, that those words just seem to waft in the subconscious all day long. Which is why it's such a perfect Advent prayer of preparation and petition. It helps to keep the scattered mind focused on spiritually preparing for Christmas during the busy and noisy modern holiday season.

I find this to be one of the shortest and most potent prayers of all time and is my favorite, albeit not traditional, novena. Novenas traditionally only last nine days in honor of the first novena, or time of prayer, when the embryonic Church prayerfully waited in anticipation of the descent of the Holy Spirit between Ascension Thursday and Pentecost Sunday (nine days). Our word for nine comes from the Latin word novem, which is where we get novena from. Even though the Saint Andrew Christmas Novena lasts for 25 days, it still falls within the tradition of an 'anticipation prayer', like that first novena to the Holy Spirit. In fact, it is also often called simply the Christmas Anticipation Prayer.