This article gives the history of how Mother Alphonsa's (Rose Hawthorne) began her home for cancer patients in New York and how her work endures to this day. 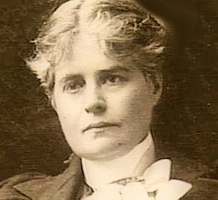 When asked by a puzzled journalist how she ended up running a home for impoverished cancer victims in Manhattan’s Lower East Side, Rose Hawthorne Lathrop simply noted that she had taken St. Vincent de Paul’s motto as her own: “I am for God and the poor.” The writer was curious because he knew that Rose was the daughter of Nathaniel Hawthorne and the wife of George Lathrop, who had served as an editor of The Atlantic Monthly. Rose and George seemed to be a fashionable couple, well connected to New York’s literary elite.

If the journalist knew that Rose would soon establish a religious community dedicated to serving those with incurable cancer, he would surely have been even more shocked. After all, Rose had been raised more or less Unitarian and had been friendly with the leading Transcendentalists in Concord such as Ralph Waldo Emerson and Henry David Thoreau and Bronson Alcott. How could a woman with this pedigree end up as a Roman Catholic nun?

As Rose said little about her conversion, her biographers have tried to find events in her life that may have made her receptive to Catholicism. All point to the time she spent in Europe as a child as being formative. In 1853, Nathaniel Hawthorne was appointed Consul to Liverpool by his good friend, Franklin Pierce, who had just been elected president. Hawthorne brought with him his wife, Sophia, and their three children, Julian, Una and Rose who was only two years old. Five years later, the Hawthornes left England for Italy and spent time in Rome, Florence, Assisi and Siena. While some American Protestants were disturbed by what they took to be the superstition and backwardness of the Italian people, the Hawthornes were much more appreciative. Young Rose was especially impressed. In Siena she would sketch the cathedral and in Rome she loved to gaze at Raphael’s Madonnas in the Vatican Museum. What fascinated her most were the scruffy looking friars that she saw walking through the streets of Rome. Years later, she recalled listening to brown robed friars chant in Roman churches and said the experience sent “waves of peace” through her.

In 1860 the Hawthornes returned to America and moved back to their old home in Concord. In the following years, Rose, who was only ten, would endure one loss after another. First, her father became increasingly ill with a disease no doctor could diagnose. Nathaniel died in 1864, leaving his family in difficult financial straits. In an effort to economize, Sophia took her children to Dresden in 1868, hoping that the cost of living would be lower in Germany. While in Dresden, the Hawthornes met another American family, the Lathrops, and Rose and George quickly became friendly.

In 1870 the Hawthornes hurriedly left Germany as the Franco-Prussian War was getting underway. Sophia took her family to England, but just weeks after their arrival, she became ill with typhoid and died in 1871. After burying her mother in London, Rose decided to marry George. She was only twenty and he was just nineteen and all of Rose’s remaining family strongly discouraged the match. The Hawthornes were fearful that George was unstable and would have trouble supporting her. And they were right to worry. By all accounts, George and Rose had a turbulent marriage. George was a talented writer of prose and poetry, but he was chronically ill and frequently drank to excess.

In 1876 Rose gave birth to a son, Francis. Both parents adored Francis and he seemed to bring them together. However, in 1881, he contracted diphtheria and died and the couple drifted apart again. In 1883 Rose left George but was living with him in New York City again a year later. By the end of the decade the couple had moved to New London, Connecticut, hopeful that George’s health would improve in a quieter setting. They also made the momentous decision to join the Catholic Church. Taking instruction from the Paulists, whose founder, Isaac Hecker, had embraced Transcendentalism for a time, the couple was baptized in 1891. Conversion no doubt brought them both much spiritual comfort. Rose’s biographers think that the Catholic Church’s teaching on the redemptive nature of suffering must have been especially consoling to her.

While agreeing on matters of faith, George and Rose still struggled in their marriage. By 1895 she had separated from George again and would not return to him. George would die of cirrhosis three years later.

Encouraged by her Paulist spiritual director, Rose, now 45, decided that she would take up nursing so that she could tend to those who were often cast off by society—cancer sufferers with no financial resources. As cancer was frequently disfiguring and as the disease was popularly thought to be contagious, many people shunned cancer victims, treating them like lepers.

To prepare herself for this ministry, Rose took a three month course in nursing at a cancer hospital and then set up a clinic of sorts on the Lower East Side in 1896. A year later, she had to move to larger quarters as more and more sufferers sought her aid. In 1898, a young woman named Alice Huber joined her in her work and a Dominican friar, Father Clement Thuente, took an interest in their ministry. Father Thuente urged them to establish themselves as a Dominican congregation and they agreed.

In 1900 the Archbishop of New York, Michael Corrigan, allowed Rose and Alice and one other woman to take initial vows and so the Servants of Relief, more popularly known as the Hawthorne Dominicans, came into being. Month by month, demand for the sisters’ services increased so Rose—now known as Mother Alphonsa—was constantly looking for larger quarters. In 1901, when a French Dominican friar offered her a 60 room estate on nine acres in Sherman Park in Westchester County, she immediately decided to buy it, even though she only had a fraction of the purchase price on hand.

Mother Alphonsa recognized that she needed substantial funding to maintain these two properties and tend to their patients who were unable to pay for their care. Unwilling to accept aid from any state agency or Church body, she decided to appeal for funds by sending letters to the newspapers. A gifted writer, Mother Alphonsa’s “begging letters” in the New York Times raised large amounts for her community. Her friend George M. Cohan also staged performances to benefit the sisters and Mark Twain offered his support as well.

As the sisters’ work expanded, Mother Alphonsa hoped that she could recruit a contingent of brothers from Father Damien’s community in Hawaii to assist her with the many male patients under their care. She corresponded for several years with Brother Joseph Dutton but he was never able to spare any brothers from his community in Molokai.

In the early 1920s, Mother Alphonsa decided that the grand wooden mansion at Rosary Hill needed to be replaced with a fireproof structure. She drew up the plans for the new building herself and began still another round of appeals to raise the $200,000 needed. She died in her sleep one night in 1926 after completing several letters to the newspapers. The new and improved facility would be completed in the year after her death.

At Mother Alphonsa’s funeral, the celebrant, Father James Walsh of the Maryknoll Missions noted matter of factly that she “gave all that she had to the service of the Master.” He then pointed out the uniqueness of her ministry: “When one works to save somebody, to help those who are blind or deaf, or who cannot walk, this task we can understand more easily, and we can realize that even people without faith would be attracted to such work as that. With the incurable it is different. One watches the ebbing of life day after day; there is no turn of the tide…. Not from any natural motive did Mother Alphonsa do this work; but from the one motive of pleasing her God and serving Him.”

In the decades since Mother Alphonsa established her community, many strides have been made with regard to cancer. New therapies have been developed to cure or at least control many forms of cancer and victims are no longer ostracized. Still, there are many people of limited means who are battling the illness and so the need remains. At present, the sisters operate homes at Rosary Hill, in Philadelphia and in Atlanta.

Mother Alphonsa has not been forgotten either. In 2003 the Archbishop of New York, Edward Cardinal Egan, initiated the diocesan process to consider her cause for canonization. He established a diocesan tribunal and historical commission which are now investigating the life and works of this woman who devoted herself wholeheartedly to serving God and the poor.

John F. Quinn is Professor of History at Salve Regina University in Newport, Rhode Island. He is the author of Father Matthew's Crusade: Temperance in Nineteenth Century Ireland and Irish-America (2002). He earned his doctorate in history from the University of Notre Dame in 1992.