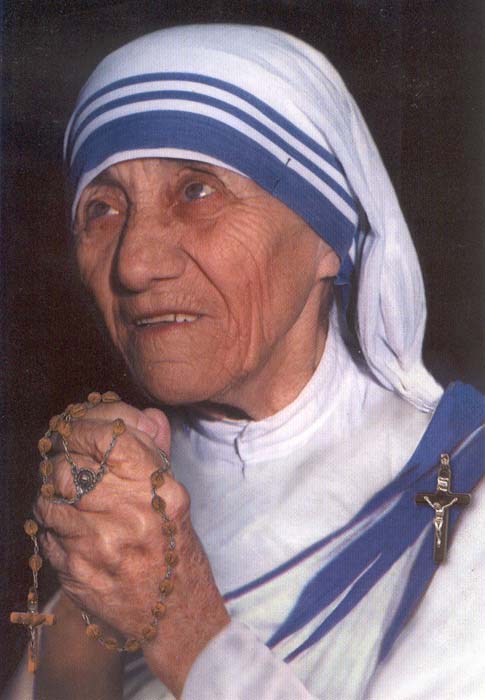 Unless you live a completely “unplugged” life, it seems to be common knowledge that little Agnes Gonxha Bojaxhiu, known as Mother Teresa of Kolkata (formerly Calcutta), will be canonized by Pope Francis on Sunday, September 4, 2016. Her feast day has been the following day, September 5. Canonization is when the Church declares that this person definitely enjoys the Beatific Vision. The canonization rite happens at the Papal Mass of canonization, and today it will be at this moment when these words are declared:

For the honor of the Blessed Trinity, the exaltation of the Catholic faith and the increase of the Christian life, by the authority of our Lord Jesus Christ, and of the holy Apostles Peter and Paul, and our own, after due deliberation and frequent prayer for divine assistance, and having sought the counsel of many of our brother bishops, we declare and define Blessed Teresa be a saint and we enroll her among the saints, decreeing that he (or she) is to be venerated as such by the whole Church. In the name of the Holy Father, and of the Son, and of the Holy Spirit.

that she will be Saint Teresa of Kolkata or Calcutta. (The spelling of Calcutta was changed to Kolkata in 2001, although much of the world still retains the British spelling of “Calcutta.”)

My inbox and feed are full of posts, articles and personal stories about Mother Teresa. Allow me to add one more small reflection.

Saint of the People

Mother Teresa of Calcutta became well-known after her Nobel Peace Prize in 1979, but she was already a household name for many Catholics. My alma mater, Franciscan University of Steubenville, honored her with the Il Poverello award at their 1976 Commencement, before she became a household name.

It seems my parents’ and my generations all have a personal story to share about Mother Teresa, whether it was simply inspiration from her writing or talks, seeing videos or images of her work, or a personal encounter. I myself had four occasions to see her in person. Three of the events were in Little Rock, Arkansas in June, 1982. Our family had the opportunity to greet her in the airport (and shake the hands of a saint!). I was 15 years old and remember being so shocked on how petite and fragile she looked, even though I was only 2 1/2 inches taller than her.

In Little Rock she agreed to have her sisters run Abba House for unwed mothers under a few conditions. The house was wonderful, but too rich for her sisters, who need to live as the poorest of the poor. The sisters’ residence needed to have the carpet and the hot water removed. That made such an impression on me, to think that those two items would be considered luxuries.

I was able to see her again in D.C. about seven years later, this time in the chapel of the Gift of Peace House. She was with Father John Hardon, SJ and making a spiritual visit to her sisters. What struck me most is how unassuming and humble both she and Father Hardon were. There was no spectacular speech or show, and yet that small intimate time in the chapel struck an eternal chord within me.

My stories are unremarkable and ordinary. I didn’t have a personal one-on-one meeting or exchange, yet I was enriched. So many others have even more special personal encounters with this saint. Whether an intimate meeting or just seeing Mother Teresa from a distance, she demonstrated what it means to love as Jesus and love Jesus in her neighbor by her actions. She loved to the fullest—something so simple yet so radical in our age that crowds flocked to her.

Throughout history there have been different people who lived such saintly lives that those who were witnesses called for immediate sainthood after their death. Saint Francis of Assisi is one obvious example. He mainly touched those in the regions of Italy near Assisi, but anyone who encountered him recognized his holiness. Now Mother Teresa in this modern era attracted worldwide attention, and after her death there was worldwide clamoring for her canonization.

I admit I was disturbed by this week’s news with Pope Francis suggesting that Environmentalism is a corporal and spiritual work of mercy. I immediately came to the same conclusions as Phil Lawler and Jeff Mirus: the Works of Mercy are completely personal, with the human person showing mercy to another person. And it does seem that mercy can only be applied a person.

It is considering the Works of Mercy that Mother Teresa comes immediately to my mind (and undermines that suggestion of a new work of mercy). My father loved retelling Bishop Curlin’s stories about Mother Teresa, especially her pointing to the Bishop that feeding the poor isn’t enough without giving love. She made sure that all her actions for others were always with love, by seeing Jesus in that person: “Whatever you did for one of these least brothers of mine, you did for me” (Matthew 25:40). She truly practiced the Works of Mercy to others.

Earlier this week there were two Gospels that brought this personal relationship to mind:

August 31: At sunset, all who had people sick with various diseases brought them to him. He laid his hands on each of them and cured them (Luke 4:40).

September 1: When Simon Peter saw this, he fell at the knees of Jesus and said, “Depart from me, Lord, for I am a sinful man.” For astonishment at the catch of fish they had made seized him and all those with him.... Jesus said to Simon, “Do not be afraid; from now on you will be catching men.” When they brought their boats to the shore, they left everything and followed him (Luke 5:8-11).

In the first excerpt, Luke points out that Jesus lays His hands on the sick. They had a personal encounter with Jesus. Mother Teresa made sure that she and her sisters always recognized the dignity of the person they were serving, showing their respect and love and that personal touch, a kind of “laying of hands.”

The second Gospel comes at the end of a miracle of fishes, but the beginning of the vocation of the Apostles, particularly Simon Peter. This is a personal encounter with Christ, the personal call from Jesus to follow him. He knows us and calls us each by name. Our faith in Christ is always on a personal level.

It is Simon’s reaction that in particular reminds me of today’s new saint. Simon Peter’s “Depart from me, Lord, for I am a sinful man” is such a human reaction. When a person is so holy, they reflect Jesus. Seeing and knowing Jesus makes us realize how unworthy and sinful we are.

St. Teresa of Kolkata reflected Jesus. She loved God with her whole heart, and her neighbor as herself. She daily lived the Corporal and Spiritual Works of Mercy recognizing and loving each person in each stage of life, seeing Jesus within. It was often disarming to witness her holiness and her sincere love given to the poor and forgotten and downtrodden, because it revealed personal inadequacy of the witness.

I always think it’s good to have those “squirmy” uncomfortable encounters with oneself to renew our relationship with Christ and our neighbors. May we learn by St. Teresa of Kolkata’s example and intercession to love as deeply without counting the costs as she did.

Saint Teresa of Kolkata, pray for us!