The Great Saints of March: Patrick and Joseph

I always look forward to mid-March. My birthday falls on March 16 and it marks the beginning of a series of breaks from the Lenten focus and a little festivity. Not everyone is celebrating my birthday, but the Church honors two very popular saints, Patrick and Joseph, within three days (and one week later is the Solemnity of the Annunciation). The liturgy of the Lenten season dominates the month of March. The calendar reform of 1969 moved some saints' days (such as St. Benedict) to give more prominence to the Lenten liturgy and allow the full cult of the saint to shine during another part of the year. But these two saints' days always fall during Lent, and have some unique characteristics in contrast to saints' days in other liturgical seasons. 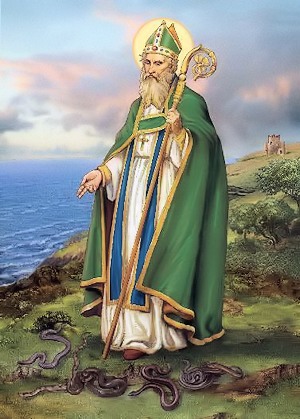 On March 17 the Church honors St. Patrick, who in the fifth century came to Ireland as a missionary and converted all the country a span of thirty-three years. He changed Ireland forever. Not only did St. Patrick convert Ireland, his influence was universal. With his work, religious orders and monasteries were established and spread. These orders preserved the Faith during the period often referred to as the "Dark Ages." And his work continues for many centuries. As the Irish emigrated, they took their Faith with them all over the world. In the eyes of the Church his sanctity isn't about the marvelous accomplishments of his life, but the actual living his Catholic faith. He was saintly. In other words, he lived the Gospel and loved Christ above all things. And that is what makes his life exemplary.

Unfortunately, especially in the United States, March 17 now is mainly equated with all things Irish and green. It is understandable that honoring this saint would remind an Irishman of his heritage. The transition from the motherland to the United States was difficult and full of persecution, and there should be a day to unite the Irish worldwide. Somewhere along the line there is a disconnect from the Catholic feast day honoring St. Patrick, but I won't belabor that obvious point.

If one lived in Ireland, St. Patrick's day is a solemnity, the highest rank of a feast day. Although it might be a bitter pill to swallow for many Irish, in the United States St. Patrick's Day is the lowest rank: an optional memorial. (But the Church recognizes that when St. Patrick is a local patron, such as the name of the church, cathedral, patron of a diocese, etc., the ranking goes higher.) From the Universal Norms of the Liturgical Year and Calendar:

9. The Saints who have universal importance are celebrated in an obligatory way throughout the whole Church; other Saints are either inscribed in the calendar, but for optional celebration, or are left to be honored by a particular Church, or nation, or religious family.5

10. Celebrations, according to the importance assigned to them, are hence distinguished one from another and termed: Solemnity, Feast, Memorial....

14. Memorials are either obligatory or optional; their observance is integrated into the celebration of the occurring weekday in accordance with the norms set forth in the General Instruction of the Roman Missal and of the Liturgy of the Hours.

Obligatory Memorials which fall on weekdays of Lent may only be celebrated as Optional Memorials.

And during Lent, even if the priest were celebrating the optional memorial for a saint, the vestments remain violet. In St. Patrick's case because he is a bishop and not a martyr, in Ireland and other countries where it is celebrated as a solemnity, the vestments would be white. St. Patrick's Cathedral in New York City would celebrate a solemnity "of the title of one's own church" and could wear white vestments. But note that the liturgical color for St. Patrick is NEVER green.

If March 17 falls on a Friday, an optional memorial still requires abstinence from meat, which is a solemn obligation of all Catholics from the age of fourteen. This would explain why when St. Patrick's Day falls on a Friday the corned beef and bangers are off the menu. Only the bishop can give dispensation to the abstinence rule.

I read of one parish having their "official" St. Patrick's Day celebration the Friday before the actual feast day, and the menu was not meatless. Regardless if the bishop has provided dispensation previously for the actual day the dispensation doesn't apply to parties on days other than the feast day! 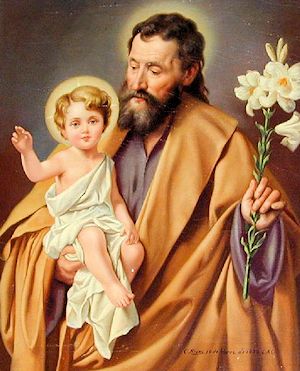 March 19 marks the Solemnity of St. Joseph on the Universal Calendar of the Church. This is the other great saint of March, actually considered after Mary to be one of the greatest saints of the Church. St. Joseph is now included into the Eucharistic Prayer at every Mass. St. Joseph was the foster-father of Jesus and the husband of Mary. He had such a privileged position to be in such intimate company of the Son of God and Mother of God. But he also had such a great responsibility to care for his wife and foster-son. There is not one recorded word of St. Joseph. We know so little about him, and yet his silence, his obedience, his tender care speaks volumes of his sanctity.

So many people think of St. Joseph as the Italian saint, but almost every nationality and religious order have great devotion to St. Joseph.

The Church universally honors St. Joseph's Day as a solemnity, which according to the Universal Norms of the Liturgical Year and Calendar is

counted among the most important days, whose celebration begins with First Vespers (Evening Prayer I) on the preceding day.

The official celebrating can start the evening before the 19th. The liturgical color is white for a solemnity. For the Mass, there will be an extra reading and the Nicene Creed is prayed. The Gloria has not been sung all through Lent, but this is also prayed today. The only prayer that is missing is the Alleluia.

In the United States, St. Joseph's Day is not a holyday of obligation, but in many other countries it still is celebrated as such.

In years where there is a very early Easter (falling in March), St. Joseph's Day might be transferred. From the Universal Norms:

If March 19 falls on a Sunday, the feast will usually be celebrated on the previous day, March 18.

Because the rank of a solemnity and Sunday is of the highest rank, if St. Joseph's Day falls on Friday in Lent, abstinence is not obligatory on this feast. From the Code of Canon Law:

Can.  1251 Abstinence from meat, or from some other food as determined by the Episcopal Conference, is to be observed on all Fridays, unless a solemnity should fall on a Friday.

There is no need to wait for official dispensation, as this is always the rule. There is no fasting on Sundays or solemnities.

Of course, I don't want to stir up controversy, but universally St. Joseph has higher rank than St. Patrick. In the United States, St. Joseph "wins" liturgically.

Although I'm comparing and contrasting the two different saints' days as they fall in Lent, the Church rejoices at both of the saints. St. Patrick and St. Joseph don't need to be pitted against each other, but it is important to understand the liturgical differences of the two feast days.

For more thoughts on St. Patrick and St. Joseph, please see my posts from last year: