Monday of the Fifth Week of Lent; Optional Memorial of Saint Isidore, Bishop and Doctor of the Church 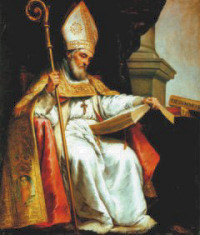 Monday of the Fifth Week of Lent: O God, by whose wondrous grace we are enriched with every blessing, grant us so to pass from former ways to newness of life, that we may be made ready for the glory of the heavenly Kingdom. Through our Lord Jesus Christ, your Son, who lives and reigns with you in the unity of the Holy Spirit, God, for ever and ever.

Optional Memorial of Saint Isidore: Graciously hear the prayers, O Lord, which we make in commemoration of Saint Isidore, that your Church may be aided by his intercession, just as she has been instructed by his heavenly teaching. Through our Lord Jesus Christ, your Son, who lives and reigns with you in the unity of the Holy Spirit, God, for ever and ever.

Have mercy on me, O God, for people assail me; they fight me all day long and oppress me.

Today we begin the fifth and final full week of Lent. In previous times the crosses and statues in church were veiled at this time to indicate Passion Time. Now the liturgical readings, day after day, tell of the lowering storm clouds that next week will break open. Today’s ancient Lenten readings taught the penitents (and teach us) that every sin is adultery to God—and is pardonable by Christ. —The Vatican II Weekday Missal

Meditation
In early Christian biblical commentary, the innocent Susanna of today’s first Mass reading was presented as a type of the unjustly persecuted Church. Thus the assignment of the Susanna story to today’s liturgy is particularly appropriate given today’s statio at St. Chrysogonus, who, like Sebastian and George, was a soldier-martyr of the Diocletian persecution in the early fourth century. Veneration of St. Chrysogonus was so widespread in Rome that his name was inscribed in the Roman Canon (Eucharistic Prayer I). Chrysogonus conformed himself to the sacrifice of Christ on Calvary by offering his own life in witness to the grace of God that had transformed him. So did St. John Fisher, who provides the second selection in today’s Office of Readings. Fisher reminds Lenten pilgrims that the imitation of Christ, while perfected in martyrdom, also takes place in many other ways: “All who have embarked on true contrition and penance for the sins they have committed, and are firmly resolved not to commit sins again for the future but to persevere constantly in that pursuit of virtues which they have now begun, all these become sharers in [Christ’s] holy and eternal sacrifice.”