Monday of the Thirtieth Week in Ordinary Time 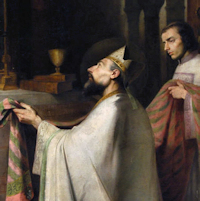 According to the 1962 Missal of St. John XXIII the Extraordinary Form of the Roman Rite, today is the feast of St. Evaristus, one of the first popes and the successor of St. Clement. Pope Evaristus governed the Church from 97 to about 107. He was buried at the Vatican.

St. Fulk of Piacenza
St. Fulk was from Piacenza, with a Scottish heritage (both his parents were from Scotland), hence his name "Fulk."

The Scotti (Gauls), who spread from Piacenza throughout Italy, that is they were Scots. Scots at the time were said not to be the inhabitants of Scotland, but of Ireland. From the green Christian island, evangelized in the fifth century by St. Patrick, dozens of saints and religious had then descended on Europe, in centuries of political difficulties and moral miseries, as for a transfusion of fresh and living blood. And behind the Saints, especially when the northern islands were invaded by the Danes, came merchants, soldiers, entire families, such as the Piacenza Scotti, from which, around 1165, St. Fulk was born.At the age of twenty he entered the canons regular of St. Euphemia, and since he was a young man of lively ingenuity, he was sent to complete his studies in theology in Paris, the intellectual capital of Christian Europe. Back in Piacenza, at the age of 30 he was made prior of Sant'Eufemia, then canon, then archpriest of the cathedral. Finally, he was elected Bishop of Piacenza. Six years later, the seat of Pavia remained vacant and St. Fulk was consecrated Bishop of this city as well.Piacenza and Pavia were not only divided by the river, but also by a terrible hostility. They were known, and still picturesquely alive in the Italian tradition, to be rivaling neighboring cities. The rivalry between Piacenza and Pavia was of long duration and atrocious and bloody.San Fulk was the great peacemaker of the two cities. Peace first of all internal, among citizens divided by political factions. Peace then between the two cities, Christian only in name.In the course of his peacemaking work, St. Fulk died in 1229 of natural causes. Nothing else is known about his episcopate. But what is known, and above all remembered, is that he was an affectionate father, rich in wisdom and holiness.Things To Do: