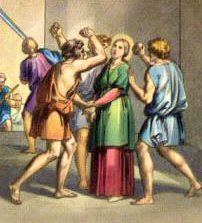 According to the 1962 Missal of St. John XXIII the Extraordinary Form of the Roman Rite, today is the feast of St. Cyril of Alexandria, bishop and doctor, and St. Apollonia, virgin and martyr. St. Cyril's feast in the Ordinary Form of the Roman Rite is celebrated on June 27th. St. Apollonia was a young martyr of Alexandria. She was arrested and executed in about 250 during a riot provoked against the Christians. Her executioners broke all her teeth. She is invoked for the cure of a toothache. St. Teilo

Upon their return home, Teilo was given charge of the church at Llandaff and the surrounding area. Shortly afterwards there was an outbreak of Yellow Fever and Teilo led his followers to Cornwall to escape its effects. From Cornwall they travelled to Brittany where they were welcomed by Archbishop Solomon of the Church of Dol. They stayed for seven years, during which time Teilo and his followers are said to have planted three miles of fruit trees. He returned to Llandaff where he ministered for many years. He died in 566 AD.Several churches in south Wales and Brittany are dedicated to St Teilo. He is depicted on a fifteenth century stained glass window in a church at Plogonnec, Finistére, and also in a statue in the Chapel of Our Lady, Kerdévot. In both cases he is shown wearing bishop's robes and mitre and seated on a stag, suggesting, as was the case with many other saints of the time, that he had an affinity with the natural world. —National Museum Wales Patron: Horses and fruit trees.Things to Do: 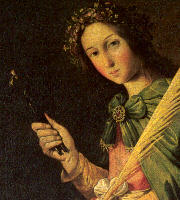 The saint was already well on in years. An account of St. Apollonia's martyrdom was written by Bishop Dionysius of Alexandria (died 265), a contemporary. She is honored as the patroness against toothache.Apollonia, it might seem, committed suicide. Her act was used by the ancients as proof that it is permitted to escape dishonor or persecution through voluntary death. But the most authoritative moralists, including Saint Augustine, declare that even in such cases suicide is not permitted, and seek to justify Apollonia's heroic act by assuming that she acted according to a special mandate from God; without such a divine injunction no one is allowed to follow her example. The saints are not to be imitated on every point. —Excerpted from The Church's Year of Grace, Pius ParschPatron: Dentists, tooth disease, toothache.Symbols: Deaconess holding a set of pincers which often holds a tooth; gilded tooth; pincers grabbing a tooth; pincers; tooth and a palm branch; tooth; woman wearing a golden tooth on a chain. Things to Do: