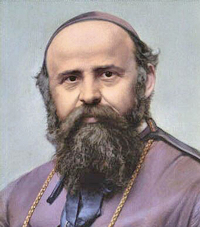 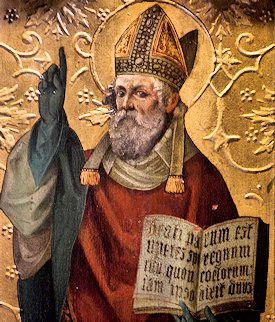 Therefore, Paulinus was consecrated Bishop of York and accompanied Ethelburga as her chaplain, holding the hope that he could convert the pagan King as well as the Northumbrian people.In 627, the Bishop’s hope came true. He baptized Edwin and his infant daughter at Easter in a wooden church at York, which led the way to many nobles and others seeking Baptism. Paulinus also built a church of stone at Lincoln where he consecrated Honorius, Archbishop of Canterbury, in 628. He thus came to be known as the first Christian missionary to labor in Northumbria.In 633, King Edwin was slain in the battle of Hadfield Chase, and all missionary action had to be suspended. Paulinus took Queen Ethelburga and her two children back to Kent. He was then made Bishop of Rochester, comforting the people with his venerable and awe-inspiring presence for the rest of his days until death on October 10, 644.—Excerpted from the Congregation of the Divine RedeemerPatronage: Rochester, EnglandOften Portrayed As: archbishop baptizing King Saint EdwinThings To Do: