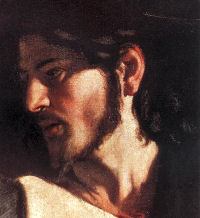 Lord, guide the course of world events and give your Church the joy and peace of serving you in freedom. We ask this through our Lord Jesus Christ, your Son, who lives and reigns with you and the Holy Spirit, God, for ever and ever. Amen.

Sunday Readings
The first reading is taken from the Book of the Prophet Hosea 2:16, 17, 21-22. The prophet's theme was the disloyalty of Israel. She was Yahweh's spouse. He had led her out of the slavery of Egypt and had given her a homeland, but she played the harlot, she was unfaithful.The second reading is from the Second Letter of St. Paul to the Corinthians 3:1-6 and is a continuation of last Sunday's reading. He is still defending his apostleship, his divine commission to preach the gospel of Christ to all nations.The Gospel is from St. Mark 2:18-22. The Old Testament, the religion of the Jews, was a preparation for the New, the Christian religion. It had many factors which raised it far beyond and above any of the other pagan religions of that time, but nevertheless it was very imperfect. The Israelites (later called Jews) knew the true God, the God who made heaven and earth and was Lord of all, but their knowledge of him was very limited and their response to that knowledge was still more limited. They knew him as their Father and Benefactor, but the vast majority of them did not regulate their lives according to that knowledge. They looked to him for material benefits and when they had these they promptly forgot him. They called on him to win their wars for them, but in their days of peace and plenty they forgot he was there. While the essence of their religion and the reason God made them his Chosen People was to prepare for the Messiah—the one who was to come—they frequently forgot this and set their whole heart and interest in getting all they could out of the present life. It is true that God for his own wise reasons, had revealed very little to them as regards life after death, but they did not know that their future hopes were tied up with the one who was to come. They did not know that if they served God faithfully, keeping his commandments, that he would provide for them. But their idea of God's providence, or providing, was nearly always restricted to earthly benefits. By the time the promised Messiah came, their idea of him was purely secular—he would be a political leader who would free them from the hated Roman rulers and give them an extensive worldly empire. When Christ came there were some who were zealous for the Law. They set out to keep it strictly according to the letter, but their motive for keeping it, pride and self-glory, ruined their otherwise good deeds. They forgot God whose Law they were keeping; they despised their neighbors, their fellow-Jews, who did not observe the Law so strictly as they; they shut their eyes and their ears to Jesus' claims that he was the promised Messiah. Even more, that he was the Son of God himself. How could he be? They argued: he is friendly with sinners, his disciples don't fast as we do, he does not keep the Sabbath, he has made one of the tax-gatherers, the vilest sinners, a disciple of his?Christ answers them in today's gospel. He is the Bridegroom of the new covenant. His new pact with those who will follow him, is a cause for joy and happiness. His coming is the culmination and crowning act of God's love for mankind. The old covenant or pact with the Chosen People was but a shadow or foretaste of the reality. The new covenant, the Christian religion is not a reparation, an amending, or a refilling of what was missing in the old—it is a new and independent entity. It is a new wedding, with new wedding garments. It is a new container capable of holding safely the new wine of mutual love between the Father and the sons he has adopted through Christ. This is our religion, the religion formed by the bonds of divine love which bind us to the Trinity. God the Father gave us Christ to be our brother. He thereby made us his own adopted sons. The Father and Son have sent the Holy Spirit into the hearts of each one of us at Baptism to enable us to recognize that God is our Father and we his beloved children. We are no longer servants, therefore, we are no longer outsiders, we are members of God's family and our duties are not obligations imposed on us, but duties which arise from being members of God's household, duties deriving from love. We keep God's laws, then, and the laws of his Church, not as something we have to do, but as something which gives us an opportunity of showing him our love and gratitude for all he has done for us. The good Christian does not inquire how much he is obliged to do in order to go to heaven, rather he seeks extra ways and means of proving how grateful he is to God for giving him the chance of reaching heaven. He finds this life far too short to do all he would like to do for God. If that is the criterion on which we are judged, many of us may truly say that we are not good Christians. Perhaps we have not been always good Christians, but while there is life there is hope. We can always mend our ways. Begin, today, to serve God out of love and very soon you'll find that what you looked on before as a burden will be changed by love into a privilege and a joy. God will never be outdone in generosity.Excerpted from The Sunday Readings by Fr. Kevin O'Sullivan, O.F.M.