Catholic Activity: Explanation of Epiphany, or the Manifestation of the Lord 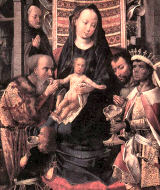 The feast of manifestation, or Epiphany, is traditionally celebrated the 12th day after Christmas, January 6th. In the dioceses of the United States this feast has been moved to the Sunday between January 2 and January 8. Here is a wonderful explanation of this beautiful feast.

The Epiphany is the feast of the manifestation of the majesty and divinity of the newborn Savior. As early as the third century, the Eastern Church, in celebrating the birth of the Redeemer, viewed it primarily as the manifestation of God to man. Hence the name Epiphany, which means manifestation, was given to the feast. Toward the end of the fourth century, as the feast gradually came to be known and celebrated in the West, the adoration of the Christ-Child by the Magi or Wise Men was stressed. Soon these sages were looked upon as the Three Kings.

In the West Christ's birthday had already been celebrated for some time on December 25. But with this feast was associated all the poverty and helplessness of the cave of Bethlehem; Mary and Joseph watched beside the crib in poverty, and the shepherds that came to offer their humble worship were equally poor. This aspect was lost sight of in the Feast of the Epiphany. It is true that the Magi found a poor, weak child, attended by poor parents. But through their faith they recognized and acknowledged the helpless Infant as the Redeemer and King of the world, and as such they adored Him, In the Feast of Christmas Christ is shown as man to a few of His chosen souls; in the Feast of the Epiphany, on the other hand, He appears to the whole world as God.

In order to strengthen and reinforce this divine manifestation to the Magi, the Church commemorates on this feast two other incidents, both of which strongly testify to the divinity of Christ: His baptism in the Jordan and the first miracle at the marriage feast in Cana. In this way, the Redeemer, whose coming was known imperfectly at Christmas, is made known to the whole world.

While the Mass of the feast concentrates entirely on the coming of the Magi and their adoration of their new-found King, the Breviary abounds in references to the two other "manifestations." The antiphon for the Magnificat of second Vespers summarizes the threefold significance of the day in words that are unmistakable: "Three miracles glorify this sacred day: today the star led the Magi to the crib; today at the wedding feast water was changed into wine; today Christ willed that John baptize Him in the Jordan so that He might become our Redeemer, Alleluia." Thus we have three supernatural interventions: the star that guided the Magi from the East, the wine miraculously brought into being from water, and the voice of the Father ringing out from the heavens, "This is my beloved Son, in whom I am well pleased" (Matt. 3:17).

Various interpretations have been given for the gifts which the Magi offered the Christ-Child. In the responses at Matins the Church says that the gold represents kingly power, incense the great High Priest, and myrrh the burial of the Lord; and so she depicts the Wise Men offering their gifts to Christ is His threefold character of King, High Priest, and Man. In his homily for the third day within the octave, St. Gregory looks at the gifts from the viewpoint of the givers, and so sees in the gold, wisdom; in the incense, the power of prayer; and in the myrrh, the mortification of the flesh. Both interpretations are worthy of consideration, and some little reflection on them should prompt us to bring all the powers of our intellect to our King, the incense of our prayers to our great High Priest, and the myrrh of our sufferings and labors to our Man-God.

The Epiphany is the high point of Christmas and the fulfillment of Advent. It is the ancient Feast of Christ the King. Its dignity in the liturgy is superior to that of Christmas. Because the feast commemorates the baptism of Jesus, its vigil has long been a day for solemn Baptism. In the present division of the Church year, the baptism of our Lord in the Jordan is commemorated on the octave day of the Epiphany.

If the Feast of Epiphany is to be fully understood as the Church sees it, it will have to be viewed from two aspects: that of God who manifested Himself to man, and that of man, typified in the Magi, who responded with wholehearted faith and love. It is, therefore, a day of faith and grace on which no other prayer ought to take precedence over that petition of the Our Father, "Thy Kingdom Come!" — Excerpted from With Christ Through the Year, Rev. Bernard Strasser, O.S.B.