Action Alert!
Catholic Culture NEEDS your help!: $37,816 left to match to win a $60K grant. Deadline is Pentecost, June 5th—we are critically behind! 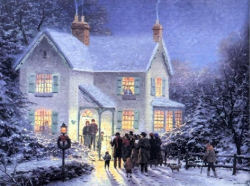 The word "carol" comes from the Greek word choraulein (choros: the dance, aulein: to play the flute), and referred to a dance accompanied by the playing of flutes. Such dancing—usually done in ring form—was very popular in ancient times among the Greek and Roman people. The Romans brought the custom and its name to Britain.

In medieval England "carol" meant a ring-dance accompanied by singing. The dancers would form a circle and, joining their hands, walk in rhythmic dance-step while keeping the form of the circle (as our children still do in their "ring-around-a-rosy" game). Chaucer describes such a ring-dance in his Romaunt of the Rose (lines 798-804), using the word "carol" for the dance itself. He pictures himself approaching a group of dancing young ladies, and one of them "ful curteisly" calls him:

"What do ye there, beau sire?" quod she;
"Come neer, and if it lyke yow
To dauncen, daunceth with us now."
And I, withoute tarying,
Wente into the caroling.

Gradually the meaning of "carol" changed, and the word was applied to the song itself. In an English-Latin vocabulary of 1440 a synonym for carol would be "song, psalmodium."

A hymn is essentially solemn; a carol, in the modern sense, is familiar, playful or festive, but always simple. The distinction between hymns and carols is often overlooked and "carol" has come to denote all vernacular songs pertaining to Christmas.

The first hymns in honor of the Nativity were written in the fifth century, soon after Christmas was fully established as one of the great annual feasts. These hymns, written in Latin, increased in number as time went on. Some of them were incorporated in the Divine Office and are still used at Christmas time in the daily prayers of the breviary, while still others are sung by church choirs at liturgical services. Many Latin hymns (1200-1700) were translated into various languages and have since become popular carols.

The early Latin hymns (400-1200) are profound and solemn, and dwell exclusively on the supernatural aspects of Christmas. Theological in text, they do not concern themselves with the human side of the Nativity. A few of the best known early Latin hymns are:

A song of the ancient Greek Church which in English translation still survives is the hymn, "O gladsome Light" (Phos hilaron); it is used in many churches at Christmas candlelight services.

Other Latin hymns which were later translated and became popular carols were:

The birthplace of the true Christmas carol was Italy. There, in the thirteenth century among the early Franciscans, St. Francis of Assisi was the first to introduce the joyous carol spirit which soon spread all over Europe. He had a particular devotion and affection for the mysteries of the holy childhood of Jesus. His biographer, Thomas of Celano (about 1260), says, "The Child Jesus was forgotten by the hearts of many. But with the grace of God He was resurrected again and recalled to loving memory in those hearts through His servant, the Blessed Francis."1

St. Francis wrote a beautiful Christmas hymn in Latin (Psalmus in Nativitate), but there is no evidence that he composed carols in Italian. His companions and spiritual sons, however, the first Franciscan friars, contributed a large number of lovely Italian Christmas carols. Here is an English-translation of one of these thirteenth century Italian carols. The tune has become very familiar as the theme on which Handel developed his Pastoral Symphony in the Messiah:

In Bethlehem is born the Holy Child,
On hay and straw in the winter wild;
O, my heart is full of mirth
At Jesus' birth.

From Italy the carol spread quickly to Spain and France, and finally all over Europe. In Germany in the fourteenth century a great many popular Christmas carols were written largely under the inspiration of the Dominican mystics, John Eckhardt (1327), John Tauler (1361), and Blessed Henry Suso (1366).

The earliest known English carol was written at the beginning of the fifteenth century. It is a lullaby of great simplicity and tenderness:

I saw a sweet, a seemly sight,
A blissful bird, a blossom bright,
That mourning made and mirth among:
A maiden mother meek and mild
In cradle keep a knave child (knave: boy)
That softly slept; she sat and sung:
Lullay, lulla, balow,
My bairn, sleep softly now.

These early English carols usually employed both rhyme and alliteration. There followed a great number of English Christmas poems in the next two centuries, most of them very tender and devout, praising the Divine Child and His Virgin Mother.

Blessed be that lady bright
Who bare a child of great might
Without pain, as it was right,
Maid, Mother Mary.