Action Alert!
SPECIAL DOUBLE MATCH: With 2 days left, your gift now is worth 4x its amount! Your gift will be matched... AND MATCHED AGAIN. Only $14,936 remaining! Donate now! 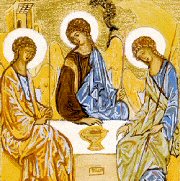 The making of the sign of the cross, which professes faith both in the redemption of Christ and in the Trinity, was practiced from the earliest centuries. St. Augustine (431) mentioned and described it many times in his sermons and letters. In those days Christians made the sign of the cross (Redemption) with three fingers (Trinity) on their foreheads. The words ("In the name of the Father and the Son and the Holy Spirit") were added later. Almost two hundred years before Augustine, in the third century, Tertullian had already reported this touching and beautiful early Christian practice:

In all our undertakings—when we enter a place or leave it; before we dress; before we bathe; when we take our meals; when we light the lamps in the evening; before we retire at night; when we sit down to read; before each new task--we trace the sign of the cross on our foreheads. — (Handbook of Christian Feasts and Customs, by Francis X. Weiser)

The "Glory be to the Father, and to the Son, and to the Holy Spirit, as it was in the beginning, is now, and ever shall be, world without end. Amen." Surely no prayer is said more often. It forms the conclusion to every psalm, and every Hour of the Divine Office is begun with it. Truly the "Glory be" is like a chime in the church tower that is ever ringing.

The soul-stirring Te Deum, a praise and thanksgiving chant to the triune God, is prayed very frequently at the end of Matins (Evening Prayer).