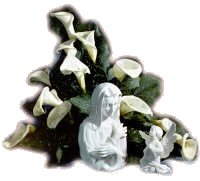 One of the most joyous anthems of the Church is the Regina Coeli. Too few of us know it as a prayer in the home, but many of us recall it as the Eastertide noonday prayer of our school days. There is a story about this anthem that gives it greater meaning. In a fearful pestilence our Lady's portrait reputedly painted by St. Luke was being carried in a procession which included Pope St. Gregory the Great. As they approached St. Peter's Basilica, the air became pure and free of pestilence. At the bridge which joins Rome to the Vatican, angels were heard singing above the picture: "O Queen of heaven, rejoice, Alleluia! for He whom thou didst deserve to bear, Alleluia! has risen as He said, Alleluia."

When the heavenly music had ceased, St. Gregory added, "O pray to God for us, Alleluia," and raising his eyes to heaven, saw the destroying angel sheathing his sword where he stood atop the Mole of Hadrian. On the dome the Pope later erected an immense statue of the angel, his sword in scabbard. And to this day the Mole of Hadrian is called the Castle of Sant' Angelo.

The following vernacular version of the Regina Coeli has become quite popular. The adaptation, made by Rev. Raymond Avery, O.S.B., first appeared in the booklet Daily Compline.

O Queen of heaven, rejoice, alleluia,
Because the Son you were chosen to bear, alleluia,
Has risen as he foretold, alleluia!
Pray for us, oh, pray to God, alleluia!