Optional Memorial of St. Callistus I, pope and martyr 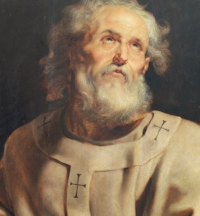 O God, who raised up Pope Saint Callistus the First to serve the Church and attend devoutly to Christ's faithful departed, strengthen us, we pray, by his witness to the faith, so that, rescued from the slavery of corruption, we may merit an incorruptible inheritance. Through our Lord Jesus Christ, your Son, who lives and reigns with you in the unity of the Holy Spirit, God, for ever and ever.

A Christian slave of Rome, Callistus was ordained deacon by Pope St. Zephyrinus, whom he succeeded as pope in the year 217. As deacon he was guardian of the Christian cemetery on the Appian Way which is still known by his name. While he vigorously opposed heresy, his charitable attitude toward repentant sinners incurred the wrath of contemporary rigorists.